How to Prevent Autumn Car Accidents 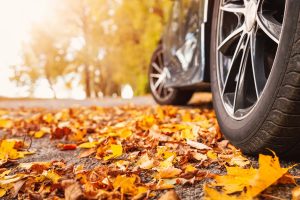 Many people are not ready to store their travel gear when the summer season ends. As a matter of fact, autumn’s arrival, which this year occurred on September 22nd, signals that it’s time to hit the highways to seek out vividly-hued trees. Pumpkin picking, hayrides, camping out, and fall festivals abound in many parts of the country. Add moderate temperatures to the mix, and you have crowded highways, as many people tend to travel by car.

But travel during the autumn season, which this year officially ends on December 21st, brings a robust list of driving hazards mixed in with the fun. Following are five autumnal driving situations and tips for overcoming the dangers they present.

Be vigilant when driving in the dark. In autumn, the sun sets earlier, so more cars are still out on the road when it gets dark.  Some people find it difficult to drive in darkness because cars, road markings, and signs are harder to see. Also, it is hard for our eyes to adjust to the glare of illuminated signs, street lamps, and headlights in front of and behind our vehicles.  Fog, which is also known as ground clouds, results in diminished visibility for night driving, but also in the early morning hours.

Rainy conditions are problematic for drivers in the autumn. Rain occurs in all fifty states, and it causes more traffic accidents than when people drive in snowy and icy conditions. Roads become slick when the oil on their surfaces meets the rain, and standing water can cause hydroplaning. Unaware, some people drive too fast for the conditions, ending up in a collision.

Autumn heralds the return of children to school and more cars and school buses on the roads. Parents dropping off and picking up children at their schools can cause congestion on local roads because traffic must stop when they are discharging and on-boarding kids. School buses can also cause congestion when their flashing lights signal that all vehicles behind and in front of the bus must stop until the children get on and off the bus safely.

Those beautiful autumn leaves so beloved by tourists and poets alike can be catalysts for traffic accidents. When leaves become wet, they can be as dangerous as black ice. Be aware that increasing your speed when driving on wet leaves may cause your vehicle to skid, making it difficult to stop before hitting the car in front of you. Leaves can also mask debris and depressions in the road beneath them. Also, some people try to look at the leaves while their vehicles are moving instead of concentrating on their driving.

Autumn brings with it an increase in animals on and near the roadways. This is due to the fact that autumn is peak breeding season for various species, especially deer. Fall is hunting season as well. Both of these scenarios can result in animals bounding onto the road and colliding with moving vehicles. Small game present driving hazards as well, since many drivers swerve their cars in order to avoid hitting them. They can end up driving down an embankment or hitting another vehicle in the oncoming lane.

If you follow these autumn driving tips and still end up in a traffic accident, the Minnesota car accident attorneys of Robert Wilson & Associates will be happy to review your case to determine who was at fault. If the other party was responsible for the accident, our law team will work tirelessly to get you the money you deserve for damages to you, your passengers, and your vehicle.

Our team will review your case and provide you with a realistic assessment. Call (612) 334-3444, contact us, or chat with us online. Our firm has been helping people win just compensation for traffic accidents for a quarter of a century. And we can help you too.